Whether it’s fruit, vegetables, freshwater fish or seafood you fancy, eating what’s in season now can mean tasty, nutritious, sustainable and cost-effective choices.
This page will help you discover what to eat right now and what foods you can look forward to throughout the year. 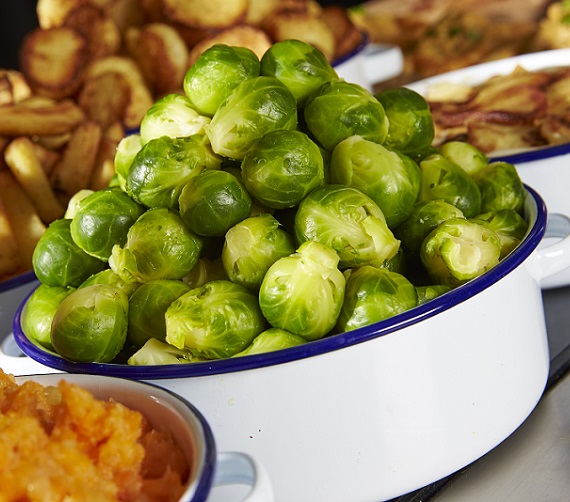 A vegetable that is often disregarded 364 days of the year and is only given a look in on Christmas Day!

These mini cabbages most often make an appearance at the dinner table from November as the winter months are when they come into season. They have to be sown in February to April and are then ready to be planted outside from April to June (depending on when they were initially sown), meaning they are ready in time for winter. Those that are bright green and small are often the tastiest and whilst many of us will buy them off the stalk in a bag, they keep for so much longer when bought on the stalk, which you can often find at farmers markets and independent shops.

Brussels sprouts often get bad press because of their flavour, which is nutty to the extent that some people find them bitter. Yet nutritionally they are amazing with a portion of boiled sprouts (80g) containing 44% of the Nutrient Reference Value (NRV) of folate and 60% of the NRV for vitamin C! And of course to cook them make sure there are no yellow leaves, or leaves that have dried up, remove these first and for any larger sprouts cut a cross into their base to help them cook evenly, this prevents the outside going mushy and the inside remaining firm. They can be steamed, boiled or stir fried, for a festive dish try mixing together halved steamed sprouts with a little fried pancetta, sherry vinegar and a little seasoning.

Fun fact: the name Brussels sprouts stems from their cultivation in Belgium a few centuries ago. 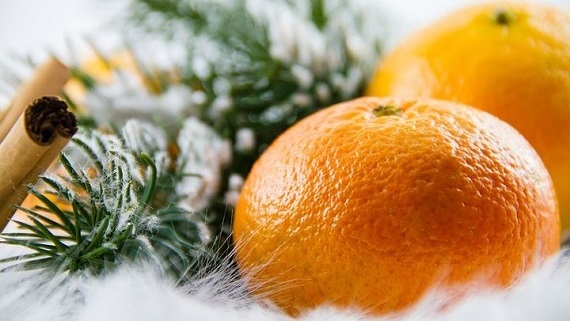 A winter citrus fruit, at its best from November through to February. In the colder months here in the UK it is found garnishing mulled wine and in Christmas stockings, or enjoy two for a snack that equates to one of your 5 a day.

Clementines are typically small and sweet, and are the smallest variety of orange available - a type of mandarin and the mandarin family also includes tangerines and satsumas.

Citrus fruits are well known for their high vitamin C content, a vitamin that generally is consumed in abundance here in the UK. One 80g portion of clementines (approximately 2 small fruits) provides 34mg of vitamin C which is 42% of the NRV.

Recipe tip: use this seasonal fruit in Gialletti which are our Clementine & Polenta Cookies for a wintery sweet treat.

A bright red berry that is popular throughout the winter months, its sharp flavour lends itself to cranberry sauce that is THE accompaniment for turkey, and festive brie based dishes also. It is likely that most of us consume cranberries mainly in a sauce or in their dried form, both of which contain added sugar due to the tart nature of fresh cranberries.

Cranberry juice has been associated with treatment of Urinary Tract Infections (UTIs) however unfortunately large volumes of it would need to be consumed for any effect to be had1, which itself could introduce new problems therefore cranberry juice is not an effective treatment for UTIs. The same as with dried varieties the juice is sweetened to enhance taste otherwise it wouldn’t be palatable due to the bitter taste.

Whilst turkey is in season all year round naturally we all know it to be the centre of attention at Christmas dinners, and turkey farming goes into overdrive towards the end of the year in preparation for the big day.

Turkey is still available throughout the year, with turkey breast and turkey mince being stocked in many fresh meat departments, but trying to buy a whole bird anytime other than Christmas can be difficult.

Turkey is a lean source of protein and a great alternative to minced red meat - it contains approximately one tenth of the fat found in beef mince! It can be used in any dish that would originally use beef or lamb mince, for example our Ragu Bolognese, as a healthier alternative. 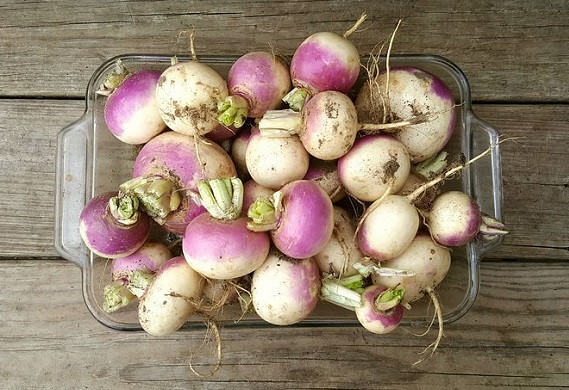 A root vegetable and for some it may come as a surprise that they are a member of the cabbage family. They grow in the ground with half of the vegetable being submerged in the soil, which has no exposure to sunlight therefore their base remains pale, whilst the top half of the turnip sits above ground level and the sunlight exposure changes their skin colour to either purple, red or green. Turnips are available all year round but are typically consumed more during the colder months in stews and casseroles. They grow well here in the UK in moisture-retentive, cool soil therefore if a period of dry weather is expected they should be watered well beforehand to prevent them drying out too much.

Turnips can be bought in baby form and these tend to be sweeter as they are younger, they can be eaten whole with the root chopped off, whereas your typical larger turnip has more of a peppery taste and needs to be peeled and sliced or diced before cooking. If buying turnips with the root and leaves still on don’t throw away the leaves as they can be eaten just as spinach or kale would be.

Surprising fact: an 80g portion of cooked turnip contains 5% of the NRV for calcium and 8mg vitamin C which is 10% of vitamin C’s NRV.

What's best to eat in November?

Nothing tastes better than eating in season. Find out what's at its best in November

What's best to eat in January ?

Nothing tastes better than eating in season. Find out what's at its best in January

What's best to eat in February?

Nothing tastes better than eating in season. Find out what's at its best in February