Mustard is one of the 14 major allergens and must be mentioned either on a label or through information provided (such as a menu), when used as an ingredient in any food. Because mustard is sometimes a masked or hidden allergen in foods, it’s important to know that it might not be obvious by sight, taste or smell.

Prevalence:
Mustard allergy is more prevalent where mustard plays a large part in the diet, for example in countries such as France. While the number of people affected by mustard allergy in the UK is unknown, we know that mustard allergy has been reported for many years. In addition, there has been an increase in the use of spices, including mustard, in different food types in the last few years which increases the likelihood of being exposed to mustard.

Sign and symptoms:
Mustard allergy can affect people of any age and, as with any food allergy, the signs and symptoms can vary and will affect people differently. Allergy symptoms that have been reported in mustard allergy range from mild symptoms such as oral allergy syndrome, hives and vomiting, to the most severe form of an allergic reaction (anaphylaxis), requiring the use of adrenaline.

Mustard in the diet:
Mustard is used in many styles of cooking including, but not limited to, Chinese, Japanese, Indian, French, Middle Eastern, Eastern European and Italian. It is also an added ingredient in many processed foods including baby food – just another good reason to make sure you read food labels carefully.

Types of Mustard:
Mustard seeds are produced by the mustard plant, and can be used in a variety of ways in cooking including roasting, marinating or as an addition to pickled products. Whole, ground, cracked or bruised mustard seeds are mixed with other ingredients to make table mustard.

Mustard greens:
In addition to the seeds, the leaves and stem of some varieties of mustard plants are edible and may be used as a salad leaf or vegetable.

List of mustards and foods in which mustard may be included:

This list is not exhaustive and aims to highlight some of the common foods containing mustard. As always, the key is to read labels carefully and ask questions about the mustard content in prepared foods when you’re eating away from home.

Diagnosing Mustard allergy:
If you suspect that you’ve had an allergic reaction to mustard, it is important to seek medical advice without delay. A follow up appointment with your GP is a good idea to determine if the symptoms you’ve experienced are suggestive of a food allergy. You may then be referred for allergy testing which could include skin prick testing and/or a specific IgE blood test. 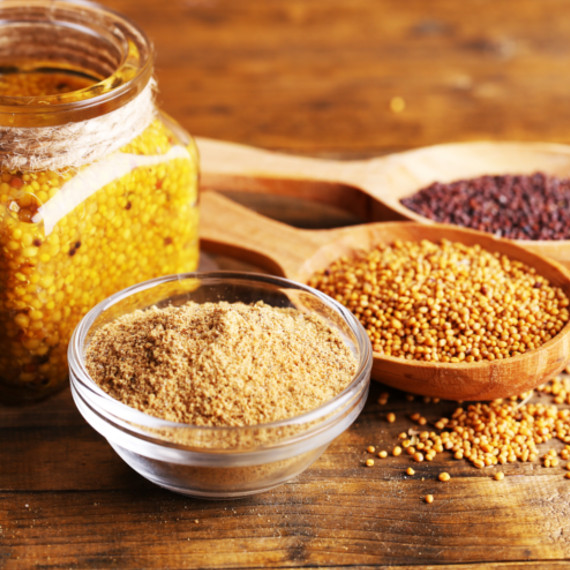